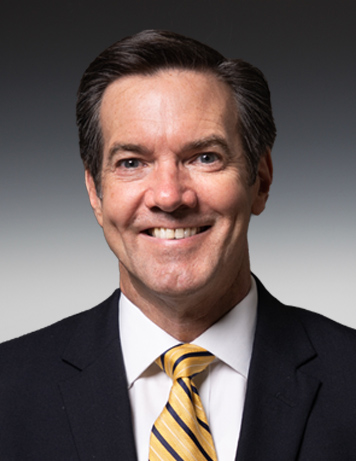 The Honorable Evan H. Jenkins brings to Jenkins Fenstermaker, PLLC unparalleled experience gained from a long and distinguished career serving West Virginians as a state supreme court justice and legislator at the state and national levels. Evan’s governmental relations and appellate practice are enhanced by his strong skills in coalition-building, association management, and state and federal procurement. A lifelong West Virginian, Evan has centered his career around helping his state and its businesses and citizens.

Evan’s focus on effective business management and leadership began as an undergraduate at University of Florida, where he earned a bachelor of science in business administration. He furthered those skills by completing coursework toward a master in business administration degree from Marshall University in Huntington, his hometown. After receiving his law degree from Cumberland School of Law at Samford University, he started his career as an associate at Jenkins Fenstermaker, PLLC, the firm his grandfather founded decades earlier.

More recently, Evan was appointed and then elected to the West Virginia Supreme Court of Appeals, serving as its chief justice in 2021. During his four years as a jurist on the state’s highest court, he authored more than 70 signed majority opinions and was integral in paving the way for the establishment of the West Virginia Intermediate Court of Appeals. Upon stepping down from the court in February 2022, Evan returned to his first professional home, Jenkins Fenstermaker, PLLC, as of counsel.

Today, Evan works directly with West Virginia businesses and organizations. Whether their needs call for a state and federal government relations attorney or experience in appellate case review and strategy in West Virginia, Evan’s clients benefit from his wide-ranging firsthand experience in these areas. When clients need counsel knowledgeable in association management, state and federal procurement, and coalition-building in West Virginia, Evan’s broad network of personal connections paired with his ability to drill down to the core of a problem and develop tactical solutions are valuable assets.

Evan’s personal life is no less engaging. In addition to working beehives in his apiary, Evan is a marathon runner, licensed private pilot, and scuba diver. His approachable personality, sincere interest in the well-being of others, integrity, and eagerness to lend a helping hand make him an excellent friend, neighbor, and citizen.

With an illustrious service record in two branches of state government as well as in Congress, clients across all industries and of all sizes find a unique resource and an advisor, strategist, and advocate in attorney Evan H. Jenkins.

Coursework toward an M.B.A., Marshall University, 1984

Supreme Court of Appeals of West Virginia, 1988 to Present

United States District Court for the Southern District of West Virginia, 1988 to Present

Former President and Board Member, Big Brothers Big Sisters of the Tri-State

Former President and Board Member, Operation B.E.S.T. (Business and Education Succeeding Together)

Former Board Member, Foundation for the Tri-State Community

Key to the City of Logan Presentation by Mayor Serafino Nolletti, 2018

Key to the City of Huntington, WV, Presentation by Mayor Steve Williams, 2013

Certificate of Appreciation, Habitat for Humanity of West Virginia, 2009

Certificate of Appreciation, Big Brothers Big Sisters of the Tri-State, 1997

Joyce Chaffin Memorial Award for Outstanding Dedication in the Fields of Speech Language and Hearing, Quota International of Huntington, 1997

Certificate of Recognition, West Virginians for Safe Roads and Bridges

Vietnam Veterans of America Chapter 308 Recognition for Support and Dedication

US Chamber of Commerce 114th Congress Spirit of Enterprise Award

Subcommittee on Transportation, and Housing and Urban Development, and Related Agencies, Member

Subcommittee on the Legislative Branch, Member